What Is The Red Light For On a Headlamp? 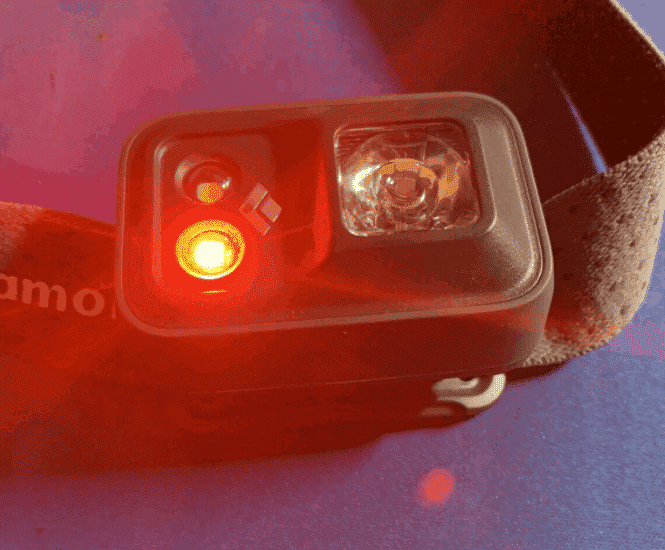 For such a simple product, headlamps have a ton of cool features. They have different colored bulbs, strobes and brightness settings. So why would you want a red light on your headlamp? It’s not just about looking cool. What is the red light for on a headlamp?

The red light on a headlamp is less blinding than a traditional bright white light. It improves your night vision, allowing your eyes to maintain focus, while still providing enough light to see. The less blinding red light is less disturbing for wildlife and less blinding for your friends at night.

Headlamps, improve your night vision and are better for natural wildlife. What does that actually mean? Is a headlamp with a red light mode really necessary? Let’s get a little farther into this for a minute.

What Is The Red Light Used For on a Headlamp?

Headlamps are so convenient on late night hiking and backpacking trips. You don’t have to hold a flashlight and they give off a ton of light in a tiny affordable package. There is one major downside!

A group of guys with headlamps is gonna be blinding for anybody walking in the opposite direction. It’s like the sun is blasting into your face. Even looking over to talk to your friends will be uncomfortable. That’s where the red light setting comes into play. The dull red light gives off just enough light to see without being overbearing.

Red lights are even on budget headlamps now. Take a look at the cheap Black Diamond Cosmo headlamp I picked up a few years ago. You really can’t beat it for the price. It has both a red and white light setting along with a few different strobe patterns. Plus it’s completely waterproof and has a ridiculously long battery life on the low/medium setting.

Most of the budget no-name headlamps on amazon will come with a red/green light setting. It can be hard to pick out a headlamp. Don’t even bother comparing the different specs. Every manufacturer lies about their headlamp strength. Stick to a well known brand like Black Diamond, Fenix, Petzl, Nitecore, Zebralight, Wowtac, etc.

The red light on your headlamp isn’t just for looking cool. There are some important benefits to using a red headlamp.

Do I Really Need a Red Light On My Headlamp?

No you really don’t “NEED” a red light on your headlamp, but it is a really nice feature to have. The red bulb helps increase your night vision and is less blinding to other members in your group.

Plus your eyes won’t have to adjust when switching the light on and off. There will be a smaller adjustment period since your pupils won’t have to go from massive to tiny and back. Your eyes are less sensitive to red light so you should be able to adjust immediately after turning your headlamp off.

What Does The Flashing Red Light Mean?

Flashing red lights are known to grab our attention. That’s why Firetrucks, Ambulances and Police Cars all use strobing red lights. The red light on your headlamp is used for the same reason.

What’s The Difference Between Red and Green Lights?

Red and Green Lamp settings serve the same general purpose. Both red and green lights make it easier for people to see at night by preserving night vision. Red is the universal signal for attention, so a green light won’t work as well in emergency situations, but it definitely has some benefits.

Green lights should be used when you need to see high contrast levels. These lights are especially popular among the hunting community since most animals are red/green colorblind. Green lights often appear bright since they require less light to bright surroundings.

When Should I Use a Red Light?

So a red headlamp preserves your night vision, but when should you actually use it? I like to use my red headlamp most of the time, but most people prefer to use a brighter light. Here are a few of the best times to use a red light.

1. Camping With a Group of Friends

Backpacking with a large group of people with headlamps on can get really annoying. Nobody likes getting blasted with glaringly bright headlamps. You get completely blinded every time you look over to talk to your friends.

It’s much easier for everybody to use a red lamp instead of the ultra bright white. If you prefer a bright path, I recommend having the person in the front of your group use their white headlamp and everybody else use red. You’ll get a brightly lit path without having to worry about blinding everybody.

2. Lots of Mosquitos and Bugs

Mosquitos and other biting insects are attracted to bright lights. So a bright headlamp will quickly bring the mosquitos at night.

Researchers have found that bugs are less attracted to red lights. The weaker light output and lower color temperature don’t draw in mosquitos. It’s basically the same concept as a yellow bug light. It’s hard to say for sure, but your red lamp might keep you from getting bit up at night.

3. Trying to Save Your Battery Life

The red light bulb on most headlamps runs at a very low power setting. My headlamp (Black Diamond Cosmo) lasts about 4 hours on the ultrabright setting or I can turn the brightness down and the bulb will last 200 hours. Both the red and low brightness settings use about the same amount of power and can last throughout the duration of a long backpacking trip.

4. Need to See In Your Peripherals

The red light mode is perfect for those times when you need to see in your peripherals and maintain night vision. You might not need perfect night vision when walking down a well kept path, but there are other times where it’s crucial.

There’s been a few times where I’ve been stuck hiking late into the night and had to climb up steep hills and rock scrambles. You just can’t see very well with a bright white lamp. The red allows you to see your handholds and get an overall picture of where you’re climbing.

It takes a long time for your eyes to adjust after seeing a bright light. Transitioning from a bright room to total darkness can take up to 30 minutes for your pupils to fully adjust. Just a little bit of light can make it hard for you to see dimly lit stars. Using a dim red bulb allows you to see the stars without having to adjust your vision.

Downsides to Using a Red Headlamp

There are a few downsides to using the red lamp mode on your headlamp. Obviously, every car would be equipped with red headlights if red was always better than bright white. So what’s the downside to using a red light?