How Much Weight Can a Trekking Pole Support? 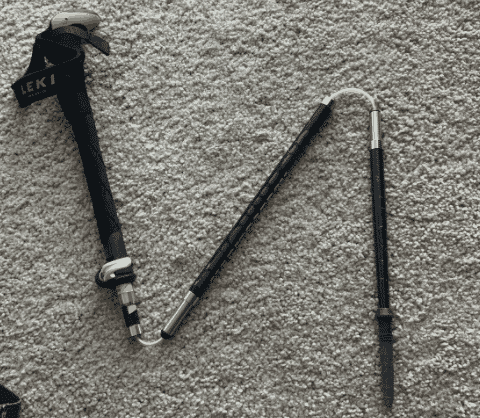 Have you ever broken a pair of trekking poles? I sure have! Whenever you take the occasional tumble or overload your poles you run the risk of damaging them. Spending all that money on poles over the years makes me wonder how much weight trekking poles can hold.

So how much weight can a trekking pole support? Trekking poles can support the weight of a person/gear or light shelter. Vertically a pole is extremely strong holding 300-400 lbs of weight. They rarely break unless the tip gets stuck between rocks/roots or wind/snow pick up and force the poles into a tough angle.

After breaking a set of expensive Leki Micro Vario Carbon Fiber Poles and dying just a little bit inside, I decided enough was enough. I finally gave Leki a call to figure out how much weight trekking poles can support. After talking to a few people I finally figured out an answer. You might be surprised at just how much weight your trekking poles can support.

How Much Weight Can a Trekking Pole Support?

Honestly, I had no idea how to figure out how much weight my poles could support. After breaking a set of expensive Leki Micro Vario Carbon Fiber Poles and dying just a little bit inside, I decided enough was enough. I needed to go ask the experts.

I gave Leki a call to figure out just how much weight my trekking poles could support. Talking to customer support seemed like I was going nowhere so I decided to email their warranty center. Here’s what Leki had to say when I emailed them.

Leki’s Response to My Question

That was the perfect answer to what I thought should be a simple question. Most poles can hold about 300 lbs depending on how pressure was applied. That’s most likely a low estimate for liability reasons so you can probably get away with 400lbs.

Other Factors That Affect Pole Strength

Although every brand will have slight differences, generally speaking a pole is a pole. They can all tolerate basically the same amount of weight. You will, of course, run into the occasional dud, but there’s not much you can do about that.

Start off by looking at what your pole is made out of. Is your pole made out of aluminum or carbon fiber? Both styles have their advantages, but this is the biggest game-changer when it comes to trekking pole strength.

Any trekking pole will be able to support your body weight/gear plus the weight of your tent if you use it to build a shelter. The only time you’ll run into problems is when you put sudden pressure on the side of the pole.

This usually happens in one of two ways. You either snag the tip of your pole and fall onto it or you use it as a support beam in heavy wind or extreme snow. It’s that sudden sideways peak force that causes poles to bend and break.

What About Trekking Poles Used To Make a Shelter?

When used to hold up your tent you usually don’t have to worry about breaking your poles. They can easily support the weight of a rainflys, tarps etc. This type of setup can usually handle moderate wind and heavy rain. Just make sure you good drainage so water can’t pool up on the top of your shelter.

The only time you might need to worry is if you get caught in a serious storm. Trekking poles have been known to snap/bend under a serious wind/snow load.

Unfortunately, I’m not a physicist, so it would be tough to calculate peak wind or snow load. You should be good with a few inches of snowfall and under 30mph wind. I know it’s hard to plan around the weather so be careful when planning your trip.

Although aluminum poles are usually cheaper that doesn’t make them weaker. They will almost always be stronger than similarly priced carbon fiber poles.

So why do so many people hike with carbon fiber poles? Carbon fiber poles are plenty strong, much lighter than aluminum poles, and they work really well. You only run into problems when you put sudden sideways pressure on them and all of a sudden they snap(aluminum bends).

Almost everybody recommends using aluminum poles when navigating rough terrain. Even when the pole snags aluminum is going to bend instead of shatter like carbon fiber.

You can always bend the pole back and live with a few tiny dents in your aluminum pole. Just know that once the aluminum bends it will lose its structural integrity. Over time the poles will get weaker and weaker until they need to be replaced.

The added weight is really the only downside to aluminum poles. Carbon fiber is just so much lighter and realistically how often do you really fall on your poles. If you’re constantly falling even with trekking poles you really need to rethink your trail speed.

When used properly wrist straps take a lot of weight out of your hands and transfer it into your wrist. Spreading the workload will decrease the overall pressure on your hand reducing fatigue over the course of a day.

Hikers seem to either love or hate their wrist straps. Personally, I’m in the occasionally wear them camp. After having a recent wrist surgery I started taking off my straps whenever I hit tough terrain. Having an already weak wrist jerked by a strap didn’t seem like a smart idea.

When you aren’t strapped into the poles instead of catching yourself with the pole you typically reach for the ground. Without straps you’re much less likely to damage your poles.

You probably got a pair of cheap trekking pole baskets when purchasing poles. My poles came with a set of summer baskets that are basically worthless. They were just so small that they eventually went in the trash.

It might seem obvious to use summer baskets in the summer and snow baskets in the winter, but that’s not the best practice. Although this sounds like a great idea those small summer trekking pole baskets do basically nothing.

They aren’t big enough to stop your pole from falling in cracks. Why bother putting them on if they do basically nothing. All those tiny summer baskets do is add unnecessary weight to your poles.

If you’re going to use baskets on your trekking poles, you might as well leave on your mud baskets or just switch to winter snow baskets. There isn’t much of a difference between snow and mud baskets anyway. I might look like a dork, but my winter baskets stay on all year long.

The bigger profile stops your pole from sinking into rocks/roots and seriously reduces my risk of damage. There’s really no downside other than the slight increase in weight and possibly drag. The only time I notice big baskets is when I’m walking through tall grass and it gets all tangled up, but that’s hard to deal with anyway.